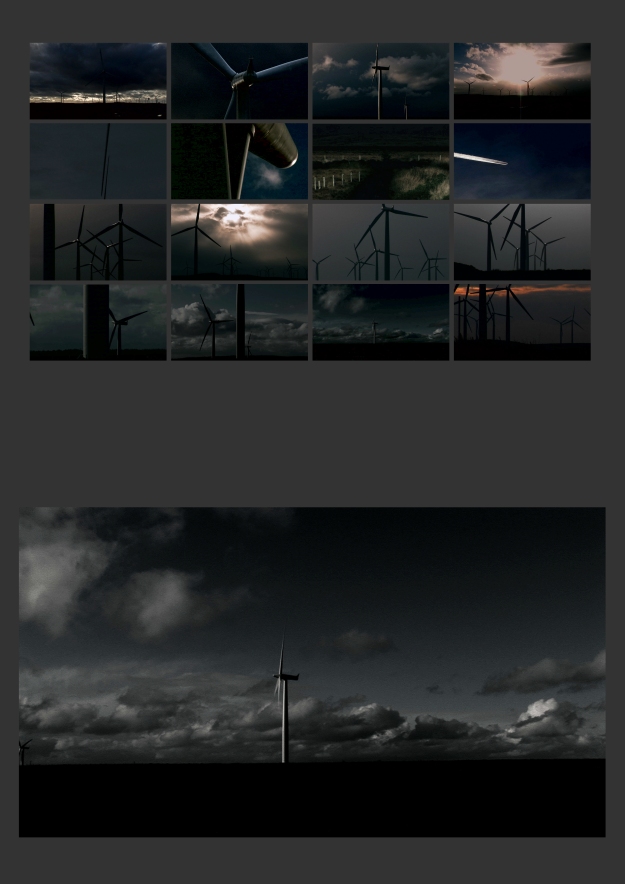 ‘Black Light/White Noise’, is an intimate observation of the people and landscape of the Black Isle and it surroundings in the North of Scotland, celebrating it’s history, traditions and mythologies.

‘End/Time’, is a 45 second animation made up of hundreds of clock faces, which display the time at, which the clock stopped.

Remind Me to Tell You a Story

Originally shot on 16mm film, ‘Remind me to tell you a story’, takes the audience through a landscape, weighted with the presence of human interaction. Throughout the film we are suspended in the space of not knowing. Stories, which might have once accompanied the film, have now been replaced with the rasping, repetitive sound of the 16mm projector. In essence the film is a reflection on time and space when the spoken word was traditionally a central means of transferring knowledge and understanding.

Playing with stillness and movement, silence and noise, ‘Dead Retina, Objects beyond Light’, is a film about departure. Combining 16mm film with digital video the films structure follows two narratives. One structured on the act of remembrance and reflection, the other a journey through wilderness. Shot while on residency at Cove Park, Scotland, the film was in part a response to the history of the Cove Park estate, which has one of the last remaining Nissen bunkers which was used during the Second World War to store ammunitions. In the film nature loses its impact as simple physical encounter and becomes metaphoric – a means through which to open up an abstract set of exchanges and interpretations, foregrounding imagined rather than literally described space.

The film, ‘Sunday Market, Hikkaduwa’, observes the Hikkaduwa market, it’s surroundings and the families of the Hikkaduwa area as they make their way too and through the market place there. On the 26 December 2004 the tsunami, which hit this area, had a devastating effect, claiming the lives of most of the families who attended the market to purchase groceries for the coming week. Central to the structure of this film is the gaze of an outsider upon a market place loaded with an awareness of it’s recent history where the attendants of this market are not only attending a market place but a place where they are constantly reminded of the loss afflicted upon them as a result of the tsunami. The Hikkaduwa market is now the site of the Tsunami memorial train, which would have been carrying passengers from Colombo to the market on the day. This memorial train sits quietly along side the market submerged in the flurry of everyday activity as people come and go.
‘Sunday Market, Hikkaduwa’, has been screened as a film as well as installed as an installation. Central to the structure of the installation is a reference to an ancient Buddhist tradition where white ribbons line the route from the house of a recently deceased to the main road to guide visitors wishing to pay their last respects. More than guiding visitor these white ribbons are a symbol of sorrow.

‘Lookout post’, is a film, which plays upon dualities, played out around the notion of the observer and the observed. In the end the audience watching the film becomes the final observer, observing the observative object.

Filmed off the west cost of Ireland in Dunfanaghy, Donegal, on 16mm black and white film, a medium used to document world political events between the1930’s and 60’s, ‘Lookout Post,’ makes reference to the buildings original function, which is spoken of as having been a lookout shelter during the Second World War.

Other stories are that it may have been used to monitor and watch over local fishing boats leaving and arriving into the village of Dunfanaghy.

Today it is unused and serves no purpose however because of the views from its geographical location is regarded as one of Irelands preeminent beauty spot. On a daily basis travelers from all over the world visit the area. They walk up the narrow path to it’s location to admire the spectacular views before leaving, shifting an emphases on the act of looking from that associated with nation protection to the embodiment of the gaze as a pleasurable activity.