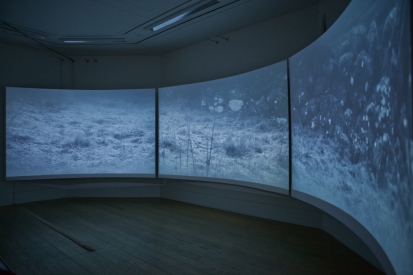 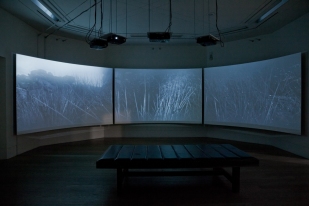 The term within-time-ness refers to Martin Heidegger’s phenomenological Interpretation of history and historicality. In Being and Time within-time-ness reconstructs that “moment of vision” in which a work of architecture first becomes present and meaningful as what it is. But we can interpret “the time of a work” simply by dating it in reference to major and minor movements of architectural history, such as the classical period, or modernity. Both ways of treating history – as within-time-ness and as historical time in reference to exogenous movements – are valid. But Heidegger warns that when discourse addresses beings exclusively in exogenous terms it is inclined to forget about Being. The paper argues that Tshumi and Photiadis’s new Acropolis Museum in Athens comprises in part an imaginative and dramatic reenactment of the within-time-ness experience of the Parthenon. 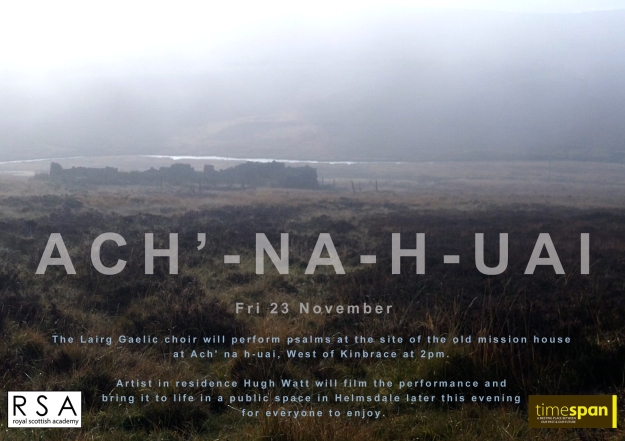 A Journey along the River helmsdale by Kayak 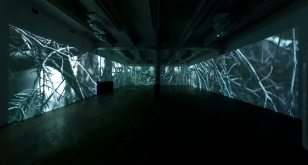 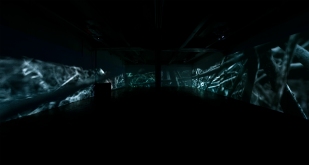 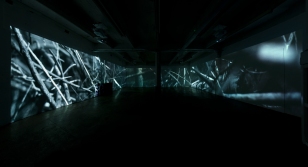 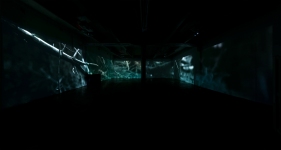 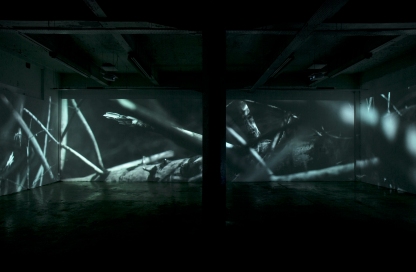 ‘Plantation’, took its title from the social and political events of 16th and 17th century Ireland, when the sense of ownership and connectedness to place for entire communities in the north was disrupted and changed forever. This fractured relation to place would mature into the divided political climate of the 1970s and 1980s in which the artist was to grow up.
‘Plantation’ is a six-channel high definition video installation where an image of decaying woodland rotated anti-clockwise slowly through 360º (in a slow reversal of time) around a gallery space over a 30 min time span. Shot in extreme close-up with a very shallow depth of field, the projected footage shifted through moments of intangible physicality punctuated by moments of sharpness and clarity. Playing with stillness and movement the installation turns the everyday into a composition of abstractions. As such, ‘Plantation’, aimed to produce not only a document of decaying woodland but a symphony of silence and loss: a memorial of remembrance – an immersive, haunting enclosure where the warmth of the sun’s rays only reaches momentarily. 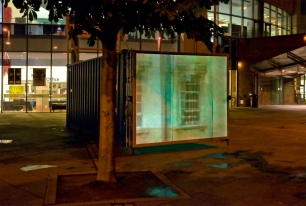 Using a motorised rotating unit, ‘As Daylight Falls’, is a 360-degree film of Belfast shot in extreme close-up from the roof of a freight container located at the waterfront in Belfast. As daylight diminished the film was projected from the interior of the container onto a screen covering its entrance, transforming it into a giant light box. As darkness fell the projected film slowly emerged, emitting an image of the city as if seen through a telescopic lens or magnifying glass. Focusing attention on architectural detail the 30-minute filmed rotation juxtaposed the historic against the new.
‘As Daylight Falls’, was shown at the 15th International Symposium of Electronic Arts, which was held in Belfast. 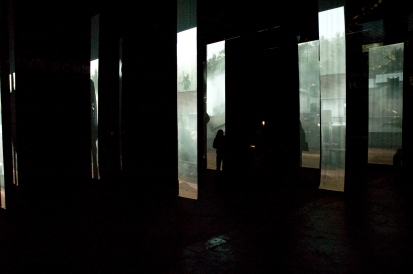 The film, ‘Sunday Market, Hikkaduwa’, observes the Hikkaduwa market, it’s surroundings and the families of the Hikkaduwa area as they make their way too and through the market place there. On the 26 December 2004 the tsunami, which hit this area, had a devastating effect, claiming the lives of most of the families who attended the market to purchase groceries for the coming week. Central to the structure of this film is the gaze of an outsider upon a market place loaded with an awareness of it’s recent history where the attendants of this market are not only attending a market place but a place where they are constantly reminded of the loss afflicted upon them as a result of the tsunami. The Hikkaduwa market is now the site of the Tsunami memorial train, which would have been carrying passengers from Colombo to the market on the day. This memorial train sits quietly along side the market submerged in the flurry of everyday activity as people come and go.
‘Sunday Market, Hikkaduwa’, has been screened as a film as well as installed as an installation. Central to the structure of the installation is a reference to an ancient Buddhist tradition where white ribbons line the route from the house of a recently deceased to the main road to guide visitors wishing to pay their last respects. More than guiding visitor these white ribbons are a symbol of sorrow

Filmed while on a three month visual arts residency at Cove Park in 2004, ‘40 Days/40 Nights’, was a continual 40 day and night time lapse recording made with three video cameras connected to three computers, which collected one frame every other second for 40 days and 40 nights. To mark to end of Hugh’s residency at Cove Park, he projected part of these recordings onto three screens in the Cove Park estate directly in front of the landscape he had been vigilantly monitoring. ‘40 Days/40 Nights’ marked the beginning of a line of enquiry within Watts artistic practice, concerned with the idea of site-specific film works, where works would be presented on the site where they were filmed. 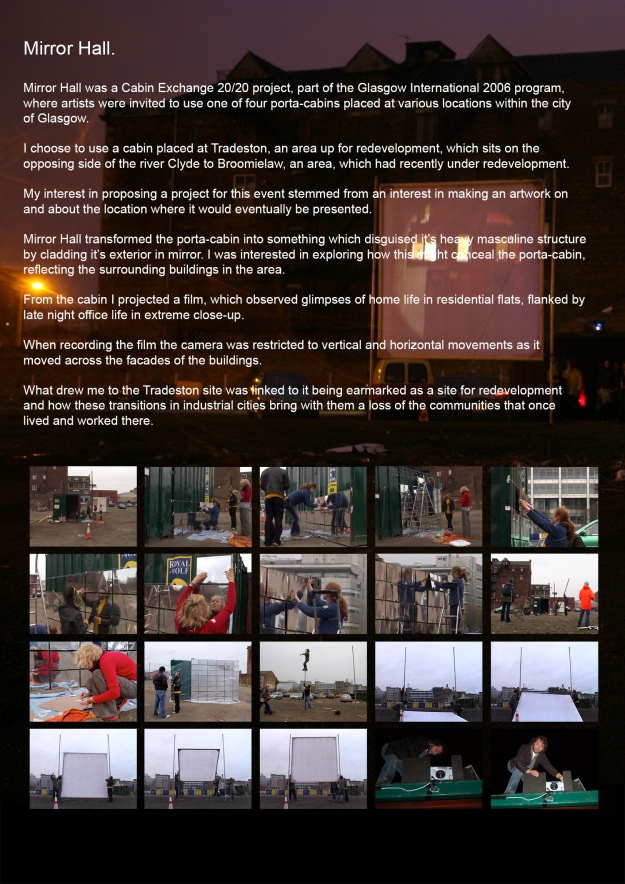 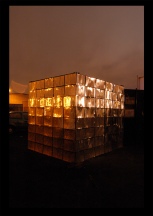 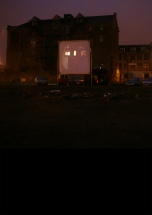 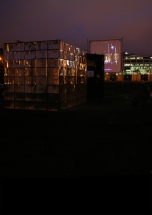 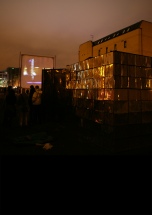 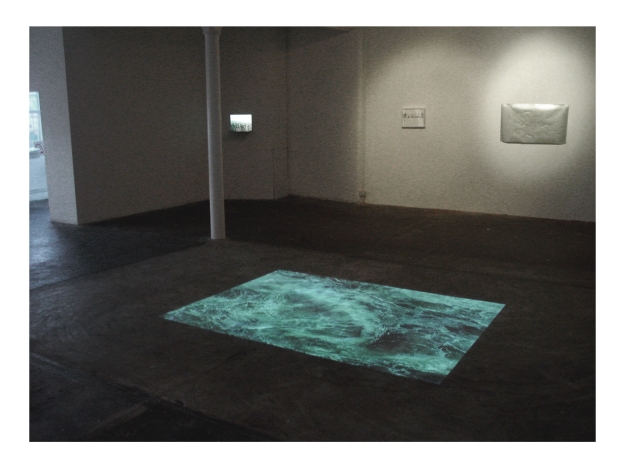 places in mind, An Tobar, Mull

‘Light / Trap’, was filmed whilst Hugh was on residency at Cove Park and was part of an extensive three month investigation into time lapse photography. Part of this research formulated itself into the work titled, ‘Light/Trap’, which was installed in the, Edinburgh Sculpture Workshop Studios, Magazine 06 show. After a site visit Watt became interested in an open space above the walls and just under the ceiling. It was a vacant space crying out to be used and he immediately recognized it’s potential in relation to his studies while resident at Cove Park. Installed in the, Sculpture Workshop Studios, space, the work set about creating the illusion of an opening between the top of the walls and the ceiling. 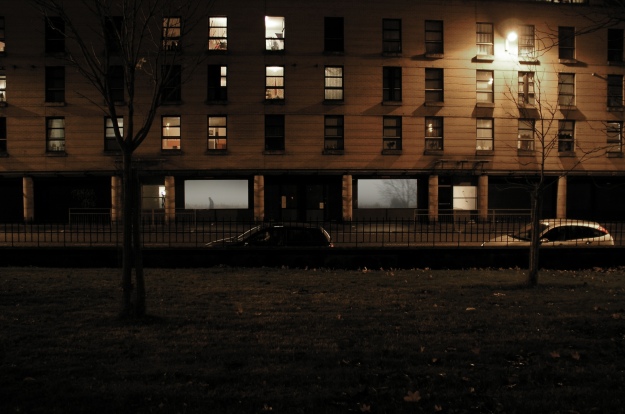 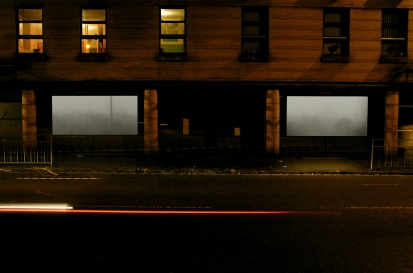 ‘Threshold’, a double projection work juxtaposing 16mm film along side digital video, describes two journeys along small country roads. The first half of the film is recorded in mid summer and the second half in the dead of winter. The installation developed out of a set of experimental recordings where a 16mm film camera and digital camera were attached to the roof of a moving car. The 16mm camera pointed backwards and the digital camera pointed forwards. Caught at the point of backwards and forwards movement, ‘Threshold’, brings into play relationships between, past, present and future. Although both were filmed at the same time, shown together side by side in the gallery space, the installation, pulls into play a set of questions as to the timing of the filmed material and whether the digital recordings were an attempt to retrace some earlier journey, to re-imagine a forgotten moment in time?